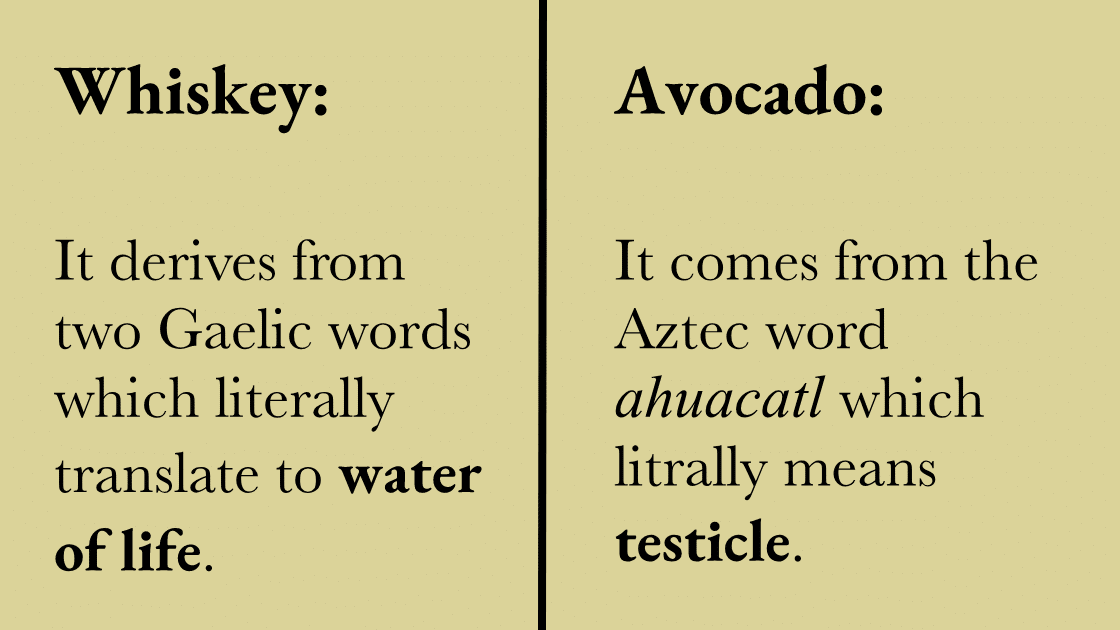 If you’re a language nerd,  you probably find great joy in the origins of words. That’s because it’s fun! It’s always a joy to track the etymology of words. You can never know what you will find. Some words have pretty much fine etymologies. Other words, however, stun us with their completely unexpected etymologies. The Language Nerds did a little digging and compiled for you some of the words which have completely unexpected etymologies. Let’s see what we’ve got!

There is a reason this word tops our list. The word avocado has its origin in the Aztec word ‘ahuacatl’ which literally means testicle. This is not surprising because avocado and a testicle look pretty much similar. What’s even more surprising is that avocados act as aphrodisiacs, foods that stimulate sex drive. So, let’s just call them “testicle fruit.”

Well, how familiar are you with Greek Mythology? Let’s give you a clue. Clue derives from the Greek word ‘clew‘, which means ‘ball of thread’. The myth has it that the hero Theseus was given a ball of thread to help him find his way out of the labyrinth of Minos. Theseus could eventually find the exit by following the trail of thread he left behind him. So, what gave him a clue to the exist? It’s the clew. from this incident on, clue has been associated with anything that might hint at a solution.

Are you familiar with the movie iRobot? It’s so relevant because the word robot comes from the Czech word ‘robota’ which literally means “forced labor.” This makes sense considering what a robot does: a series of complex actions programmable by a computer, hence forced. A robot did never consent to what he does, did it?

Whiskey is good and so is its etymology. What most people don’t know is that whiskey is the shortened form of whiskeybae which comes from the Old English ‘usquebae’ which is derived from two Gaelic words: ‘uisce’ (water) and ‘bethu’ (life). So there you have it: whiskey etymologically and literally means  “water of life,” which can’t be more accurate.

We all know what phony means, which is not genuine or fraudulent. But not everyone knows the origin of this word. Well, phony has its roots back in the days when pirates used to sell ‘fawney’ which is British slang for fake gold rings. When you add a buccaneer’s accent, everything is possible.

Although the origin of this word is not entirely certain, it is said that girl is related to the Low German root ‘gor’ which was used to refer to kids of both sexes, or simply ‘child’. Which makes you wonder, what do a child and a girl have in common?

This word has its origin in Arabic and has an interesting story. During the Crusades, members of a fanatical Muslim sect used to smoke hashish (weed) and then murder leaders on the side of crusaders. These infamous murderers identified themselves by the name ‘hashishiyyin’, which means in Arabic hashish users. Through centuries of altering pronunciations, English arrived at assassin.

The origin of jumbo is as big as jumbo itself. In 1880 Barnum bought an elephant and named it ‘Jumbo’. By age 7, this creature consumed 200 pounds of hay, two bushels of oats, one barrel of potatoes, 15 loaves of bread, tons of onions, and several gallons of water. Jumbo grew tremendously to weigh six-and-half tons.  His name stems from two words in Swahili: jambo (meaning hello) and jumbe (chief). So, jumbo as such means “hey chief.” Jumbo has the meaning it has because Barnum’s elephant was Jumbo.

You have reached the end of the article. Thank you for stopping by. Please share if you think someone should read this.