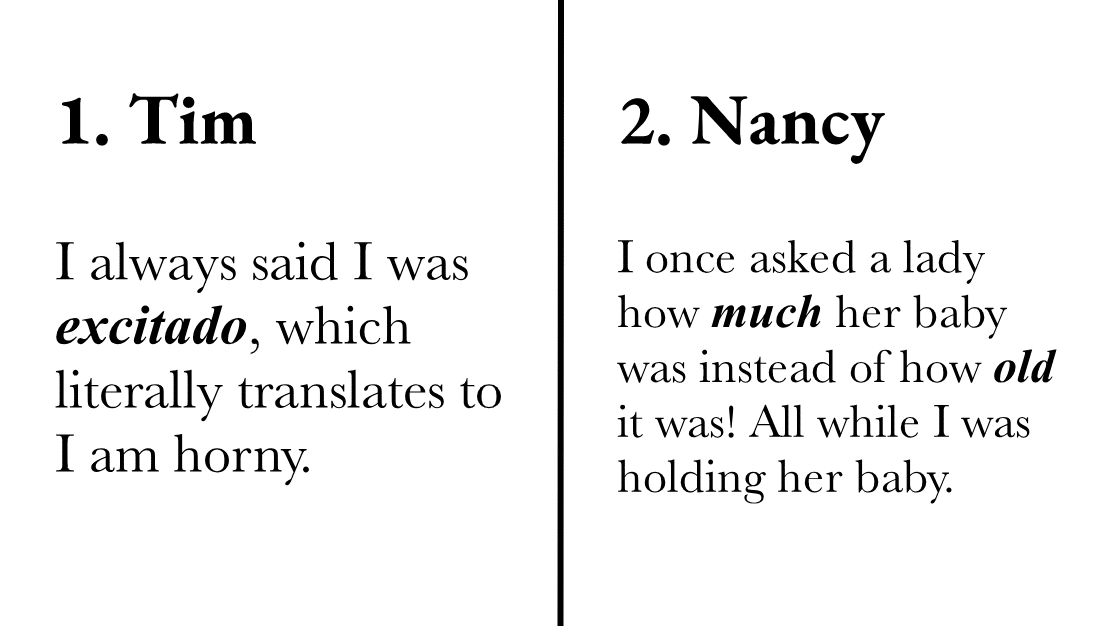 One of the moments that stick with us as language learners are the mistakes we make while we try to speak a second language. It’s undeniable that you can’t speak a language without making mistakes here and there, and that’s how we learn after all. But, sometimes we make some really embarrassing mistakes that haunt us for the rest of our lives. It is for this reason that you are reading this article. Because we’ve asked our followers at The Language Nerds about the embarrassing mistakes they have made while speaking a second language and they provided responses that will make your day. Have a great read ?!

I was speaking Spanish on the phone. I asked the caller how things were going. He said, ”Muy Bien, gracias a Dios.” I thought it was strange and said ”Adios,” back and hung up.

I’m currently living in Brazil. they speak Portuguese here. In Portuguese pâu means “bread’ and pau means “dick”. This is a slight pronunciation difference so guess what I ordered every day.

In Spanish, while discussing excess baggage fees, I once told an airline desk agent, ‘I will hit (Sp: pegar) you’ when I meant to say ‘I will pay (Sp: pagar) you’.

I once asked a lady how MUCH her baby was instead of how OLD it was! All while I was holding her baby…

In Mandarin (a tonal language) in response to the question, “What’s wrong?” I answered, “I f*cked a cat” instead of “I’ve got a cold.” Fortunately, nearly every learner of Mandarin before and after me has likely made this very mistake.

Not my story, but my father in law is a deacon at a Catholic Church, and he was talking about Jehovah’s Witnesses during the Spanish mass. He kept on saying “Los Testiculos de Jehová” instead of “Los Testigos de Jehová”. I bet you can guess what the first one translates to.

Saying I was “embarazada’ by my Spanish. In Spanish embarazada does not mean embarrassed. It means “pregnant”. So, tread carefully when you want to say “embarrassed” or you might get pregnant.

I was translating at work and went to tell the patient that dry skin gets worse in winter (invierno) instead I said infierno which is hell. So I told her Dry skin is worse in hell ?

New to the language, and my waitressing job, when one young woman ordered a ‘tafrit’, I wrote it on my pad. Her partner said ‘gam ani’, ‘me too’, so I wrote a 2 in front of tafrit. What’s a tafrit? A menu!

I told my boyfriend’s mom that I had a knife in my testicles and we could use it to eat Nutella ?

I was starting a student internship in France and asked my new colleagues if the previous incumbent had enjoyed his time in France… except I used the verb “jouir” which can mean to enjoy but also means to come (sexually). So I basically asked “Did he come a lot while he was here?” I think I made their night…

telling someone “F* You” in ASL instead of thank you. I have made plenty of ASL mistakes but man that one took the cake.

I know all those words, but that sentence makes no sense to me

7 thoughts on “People Share The Most Embarrassing Mistakes They Made While Speaking a Second Language and it’s Hilarious.”