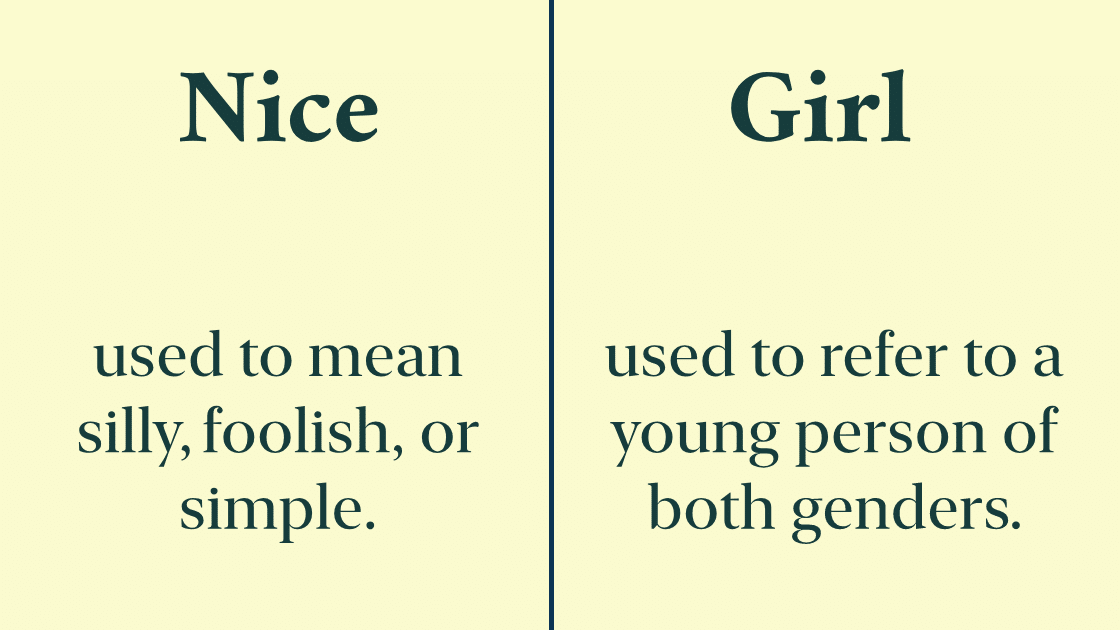 Language belongs to us and we do with it what we please. We invent new words, new spellings and sometimes whole new languages. When it comes to words, we decide what they mean and we change their meanings at will. That’s what English speakers did to the words below. They used to mean something then took a semantic detour. Let’s find them out.

This is a beautiful word. But it has not always been so. In fact, nice used to mean “silly, foolish, or simple” far from the compliment it is today.

When you deconstruct the word awful you get the meaning: “something worthy of awe.” And that’s what this word used to mean, not what it means today. Ever heard of “the awful majesty of God?”

500 years ago, when you flirted with someone you flicked something away at them or you flick open a fan or otherwise make a brisk or jerky motion. It was far from playing with their emotions.

Have you ever wondered about the expression “meat and drink”? It comes from an older meaning of the word meat that refers to food in general.

This hasn’t always been the cute word we know today. It used to mean clever or shrewd. Nineteenth-century politician Thomas Chandler Haliburton used the word to describe a shady lawyer.

This word is an eponym. It’s named after the infamous Guy Fawkes who was involved in an attempt to blow up Parliament in 1605. Folks used to burn his effigy, a “Guy Fawkes” or a “guy,” and from there it came to refer to a frightful figure. In the U.S., it has come to refer to men in general. Read more about the word guy [here]

Nervous means jumpy nowadays. That has not always been the case. Nervous used to mean strong and sinewy.

We use silly to mean foolish or frivolous. Is this what this word always meant? No! It used to mean innocent or pitiable.

The word girl used to refer to a young person of both genders, not just a young female.

Long ago, if you were naughty, you had naught or nothing. Then it came to mean evil or immoral, and now you are just badly behaved.