Tea if by sea, Cha if by land: Why the world has only two words for tea. |
Skip to content 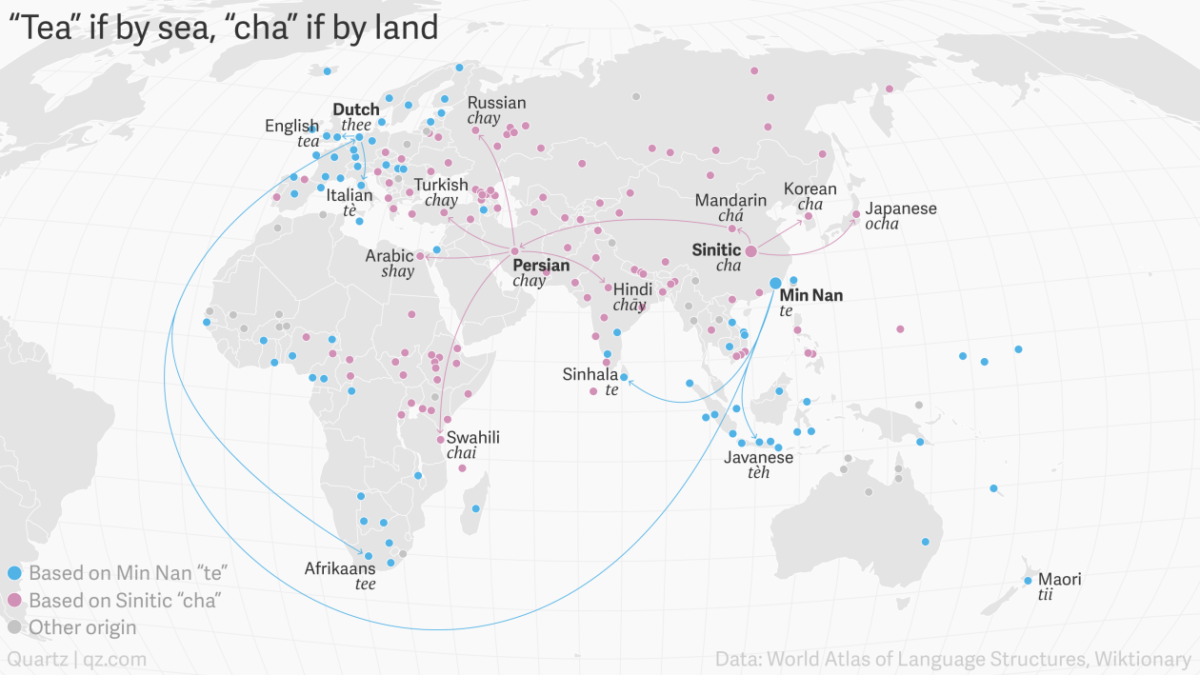 Both versions have their roots obviously in China and how they spread across the world is fascinating. It shows how commerce and globalization from hundreds of years ago have shaped our modern language and world. Variations of the “cha” word spread across land, along the Silk Road. While the words that sound like “tea” spread over water by Dutch traders who brought the novel leaves to Europe. That means if the word for tea sounds like ‘tea’ in your language, it was brought to you via water, and if it sounds like cha it got there through land.

The term cha (茶) is “Sinitic,” meaning it is common to many varieties of Chinese. It began in China and made its way through central Asia, eventually becoming “chay” (چای) in Persian. That is no doubt due to the trade routes of the Silk Road, along which, according to a recent discovery, tea was traded over 2,000 years ago. This form spread beyond Persia, becoming chay in Urdu, shay in Arabic, and chay in Russian, among others. It even made its way to sub-Saharan Africa, where it became chai in Swahili. The Japanese and Korean terms for tea are also based on the Chinese cha, though those languages likely adopted the word even before its westward spread into Persian.

But that doesn’t account for “tea.” The Chinese character for tea, 茶, is pronounced differently by different varieties of Chinese, though it is written the same in them all. In today’s Mandarin, it is chá. But in the Min Nan variety of Chinese, spoken in the coastal province of Fujian, the character is pronounced te. The keyword here is “coastal.”

The te form used in coastal-Chinese languages spread to Europe via the Dutch, who became the primary traders of tea between Europe and Asia in the 17th century, as explained in the World Atlas of Language Structures. The main Dutch ports in east Asia were in Fujian and Taiwan, both places where people used the te pronunciation. The Dutch East India Company’s expansive tea importation into Europe gave us the French thé, the German Tee, and the English tea.

Interestingly, other languages that don’t use either version are in places where tea grows naturally and that’s why they have their own words for it. An example would be Burmese in which tea leaves are called lakphak.

6 thoughts on “Tea if by sea, Cha if by land: Why the world has only two words for tea.”